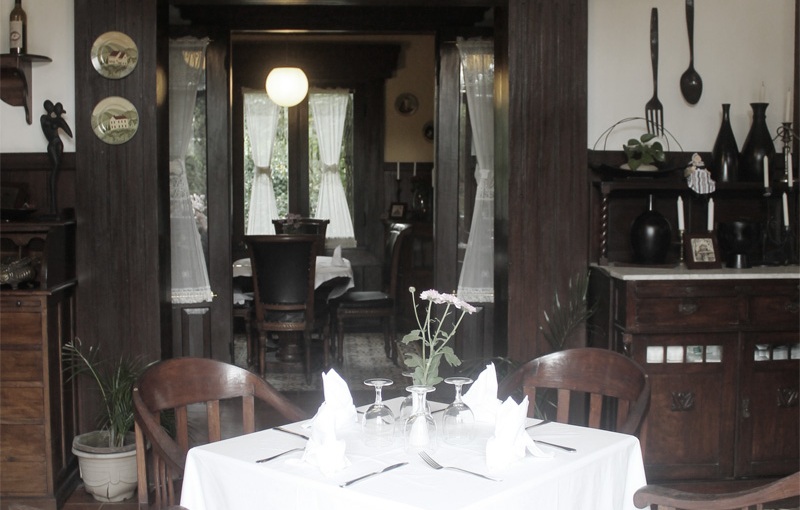 Ullen Sentalu is a private museum located on Jalan Kaliurang, Yogyakarta – Indonesia. The museum is initiated by Haryono family and now is managed by Ulating Blencong Foundation. I forgot what Ulating Blencong stands for  but as far as I remember the foundation was also founded by the family.

We can reach the museum from Yogyakarta by using public transportation, but the bus is rarely come. I suggest you to just rent a car to get there. It only took you 45-60 minutes to go to Ullen Sentalu from Yogya. The museum located on high land, hence it kinda remind you of Puncak, but it’s better than Puncak.

To enter the museum you have to pay IDR 25k per person. Also, you have to queueing since to enter you have to be in team consist of 15 to 20 persons and guided by 1 tour guide. The interval per team is approximately 10 to 15 minutes, therefore, after you buy the ticket, I suggest you to stay on the line. You know… because some people has no manner and won’t bother to cut off the line when there is a chance.

Please ensure you follow all the rules at the Ullen Sentalu Museum:

– no food or snack

– don’t touch anything in the museum

In the museum, as i told you before, you will be guided by 1 person. The tour guide will explain you the history and the philosophy of the heritages in the museum. The tour took 30-45 minutes per round. At the end of the tour, you will get to taste a special drink from the museum. Why is it so special? Because they said the drink was formulated years a go by the ancestors and believed can make you stay young. I only took a sip of the drink because some greedy person took more glass than he or she has to. I was busy taking picture (that was the only room where you allowed to take picture) and when i got back to the table, all the glasses were already empty (-____-) Anyway, the taste was like a beras kencur herb drink.

The gateway from the museum brings you to another nice place, the Beukenhof restaurant. So, the track was like this: the museum >> the herb-drinking-break >> end of the tour >> voila, a restaurant at the exit. But at that time, I went to the restaurant first, then the museum. But i think it would be nicer if you start with the museum before you eat.

If you enter to Beukenhof from the main gate instead of the museum, you will be welcomed by an exotic statue of Brahma. Well, i’m not quite sure about that. Brahma is the only god with 4 faces that i know. And also other statues that standing awkwardly in a forest area. The second statue was kinda creepy though.

The restaurant was nice with touch of European architecture, looks like a french restaurant, or something like that. With classic slash romantic ambience that will make you in love at the first sight. It was like went back to the past. Well, i’m talking about our grand mother and great grand mother’s past.

I need time to think which menu to be ordered. Since most dishes looked tempting but the price makes you think twice, lol. Then i decided to ordered Beef stroganoff with pasta and a pot of jasmine flavoured Twinings Tea, it cost around a hundred thousand. The cost was reasonable since the food was good and the ambience was great. Me and my friends enjoy our visit there, we eat, and we talk a lot while enjoying our hot tea.

These are reasons why you should come there when you in Yogya:

1. It’s a private museum. What does it means? It means the museum is well-maintained, the employees are friendly and really  know what they are doing, and the place is clean. It’s not a secret that most museum that runs by governor tend to be neglected and in poor condition.

2. Ullen Sentalu is different, they focus on the history and  philosophy of each object. I remember the guide share us the philosophy of culture on Keraton or West Java in general. She said this to us “Dadi wong ojo nduweni roso Rumongso Iso, tapi nduwe roso Iso Rumongso” which generally means don’t think you can do anything and be proud and arrogant about it, but be a person who can feel anything and empathy with other people. That is how you have to live a life. That words moved me.

3. Beukenhof. The ambience and the food are great, too nice to be missed. If you a couple, you have to stop by. It’s very romantic place.

I enjoyed my visit there. Bpth the museum and the restaurant. I don’t mind to have lunch and hang out with my friends at Beukenhof again on my next visit to Yogya (just realized i’ve been to Yogya like once every year since 2009). You also need to go there, my friends. You won’t regret it, I promise 🙂

4 thoughts on “A Note from Yogyakarta: Ullen Sentalu”